The past few years have seen a pendulum swing from ever-more granular ad targeting metrics to restoring the user’s control over their privacy. Overuse of sophisticated advertising algorithms led online visitors to install ad blockers, bringing the industry to realize that online advertising needed more than self-regulation. So, in stepped a group of regulatory bodies, the GDPR (General Data Protection Regulation), which came with hefty fines for privacy violations. The emphasis on privacy, beginning in the European Union, has taken over the world. The result is the gradual disappearance of the third-party cookie, the most convenient way to follow a potential customer around the Internet.

Cookies remember user-specific website configurations, such as language preferences, login details, and products added to shopping carts, even after a user leaves a site. Cookies are actually a convenience for consumers because the site remembers what they did there the last time they visited. The cookies saved on a site that was visited are called first-party cookies.

Typically, you want these cookies as a consumer. They are not going to go away. But, because cookie files are widely used to collect certain pieces of information, they can also be used to carry out advertising processes, such as behavioral profiling and retargeting. These are called third-party cookies, and they are put on a site by someone other than the site a consumer visited. 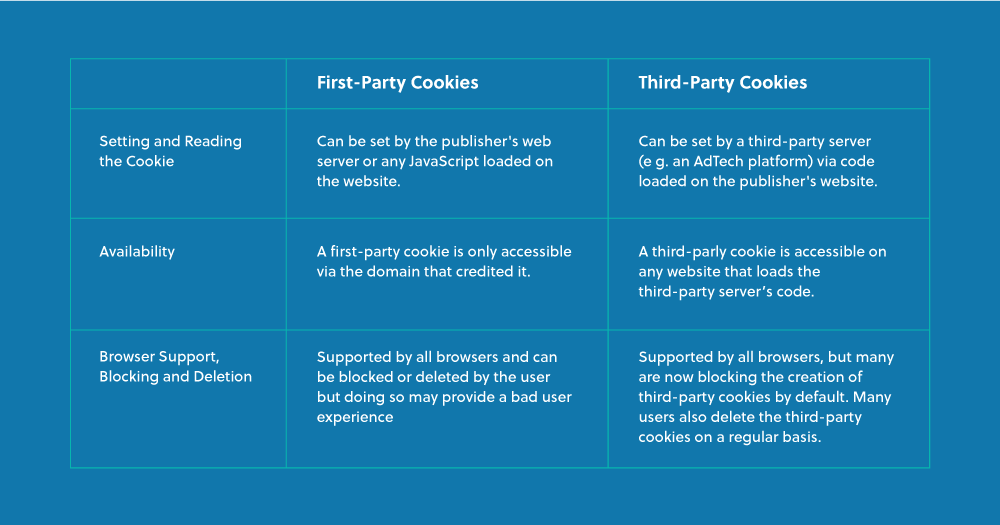 After enough irritated consumers began installing ad blockers on their browsers, the browser makers decided to block third-party cookies. Safari blocked third-party cookies, then Mozilla (Firefox), and in January 2020 Google Chrome announced that it will phase out third-party cookies by 2022. The coup de grace was administered by Apple, whose own privacy standards led it to deny advertisers access to the IDFAs of its mobile phones. The Identifier for Advertisers (IDFA) is a random device identifier assigned by Apple to a user’s device. Advertisers used this to track data so they could deliver more targeted ads.

What does this mean for Advertisers and Publishers?

Ever since the browser makers made the decision not to support third-party cookies, advertisers have been looking for alternatives. The latest of these alternatives is one supported by Google, which owns a high percentage of the online advertising business (except for that owned by Facebook). A while ago, Google established a Privacy Sandbox, and it has been testing a flurry of tools to help advertisers and ad-supported publishers continue to create the right audiences for their products. Google recently announced that it was going to replace third-party cookies with FLoC (Federated Learning of Cohorts), and it will be available for testing as early as March.

Federated Learning of Cohorts (FLoC) proposes a new way for businesses to reach people with relevant content and ads by clustering large groups of people with similar interests. This approach effectively hides individuals “in the crowd” and uses on-device processing to keep a person’s web history private on the browser.

By creating simulations based on the principles defined in Chrome’s FLoC proposal, Google’s ads teams have tested this privacy-first alternative to third-party cookies. Results indicate that when it comes to generating interest-based audiences, FLoC can provide an effective replacement signal for third-party cookies. Our tests of FLoC to reach in-market and affinity Google Audiences show that advertisers can expect to see at least 95% of the conversions per dollar spent when compared to cookie-based advertising. The specific result depends on the strength of the clustering algorithm that FLoC uses and the type of audience being reached.

Thanks to the initial FLoC results, the ongoing development of the APIs, and encouraging dialogue with the industry, we are more confident than ever that the Privacy Sandbox is the best path forward to improve privacy for web users while ensuring publishers can earn what they need to fund great content and advertisers can reach the right people for their products.

For Google’s ads teams, the Privacy Sandbox technologies represent the future of how our ads and measurement products will work on the web. We encourage others to join us in defining this new approach which will create better experiences for consumers while providing more durable solutions for the ads industry. (Source: Why GitHub?)

All of this is meant to assure you that Google has everything under control. And indeed, some folks think this would give Google too much control. There are other ideas to replace third-party cookies, such as LiveRamp and The Trade Desk’s Unified 2.0, that are more of a contextual targeting play. We don’t think this discussion of third-party cookie replacements is over yet.

Learn more about third-party cookies on Chrome, Safari, and Firefox.